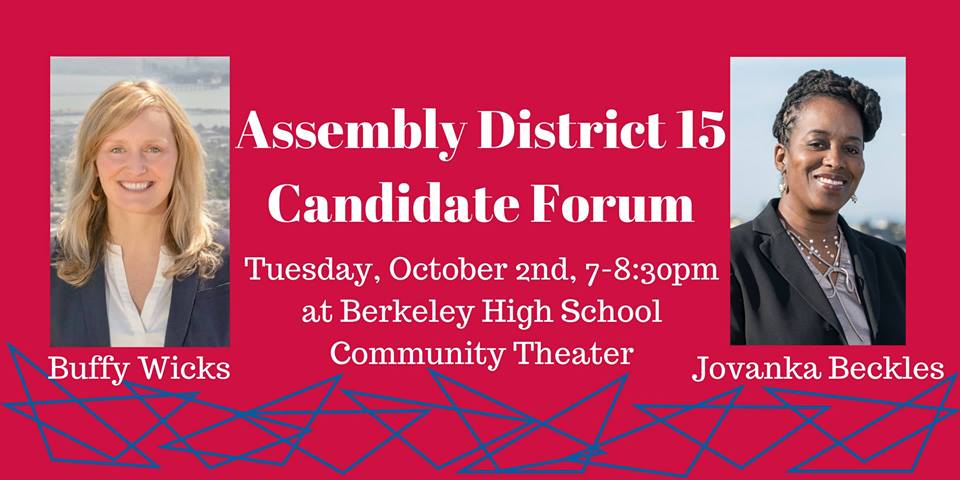 Join the League of Women Voters, Berkeley City College Political Science Department, Ashby Village, and Elder Action for an Assembly District 15 Candidate Forum. All candidates, candidate supporters, and audience members must follow the League of Women Voter’s ground rules (see below). There will be opening and closing statements, prepared questions, and questions from the audience. Audience questions will be submitted in writing throughout the forum and will be reviewed for repetition and relevancy before being given to the moderator. The forum will be recorded and uploaded to our website and Youtube.

The League of Women Voters is a non-partisan political organization that encourages informed
and active participation in government and influences public policy through education and advocacy. The
League never supports or opposes candidates for elective office or political parties, but sometimes takes
positions on ballot measures.

● All of the candidates who have officially filed with the Registrar of Voters will be invited.
● A format will be chosen which will give each of the candidates a chance to speak with time limits and
which will be fair to all of the candidates.
● There will be a timekeeper to monitor time limits. Upon time limit expiration, candidates will
relinquish the floor.
● Candidates are expected to maintain polite and civil discourse. Any incivility will be stopped by the
moderator and may result in exclusion from future forums.
● Candidates who choose not, or are not able, to participate in the forum may not send a substitute, but
may submit a brief statement, which will be read by the moderator.
● Written questions from anyone present will be screened by a team from the League to ensure a range of
topics and issues. Each candidate will have the chance to answer questions; there will be no rebuttals.
● The League members who serve as moderator, interviewer, question sorter, etc., will not be announced
supporters of or contributors to any candidate or to issues that any of the candidates is strongly
identified with.
● No candidate literature/paraphernalia will be displayed or distributed in the meeting room. This means
that candidates and their supporters are asked not to wear any campaign badges, tee shirts, etc. during
the forum. After the forum, candidate literature may be placed on the tables provided outside the
meeting room. The intent of these provisions is to preserve the decorum and neutrality of the forum so
that attendees and online/TV viewers can focus on the issues.
● The League of Women Voters of assures candidates that it is committed to having every race
on KTOP TV, YouTube, and our websites.
● In forums in which the League is the lead sponsor, we reserve the right to have the final say on ground
rules. In those initiated by other organizations where the League is a co-sponsor, we reserve the right
to publicly disassociate ourselves from any forum that is not non-partisan.

● Candidates not adhering to the forum ground rules will be considered out of order. Penalties may
include immediate loss of microphone privileges and exclusion from future League sponsored forums.

The League of Women Voters of: